I grew up with the state fair, living in Salem meant that getting there was easy, and parents were comfortable dropping their teenage charges off for an afternoon without worrying something awful would happen. It was always a bit bittersweet because the end of the fair meant the beginning of school, but it was a fun way to end our break.

In Jr. High and High School you’d always want to have a date take you to the fair, it meant you were cool enough to have a summertime boyfriend. I can remember going with my buddies and seeing other friends their with their boyfriends and being oh-so-jealous. It was the place to see and be seen.

My Junior and senior year I worked at the fair, it was two weeks of hot sweaty labor inside the Hefty Chef building, it’s gone now (along with all the other permanent eating establishments there), but used to house the largest fast food establishment there, serving the requisite greasy curly fries, fried burgers, fried everything. The only training we got was a half day of orientation learning the cash registers and the menu basics. Back then there was no food safety training, no safety training of any kind, I guess they figured if we’d survived this long around hot stoves at home, we’d be smart enough not to burn ourselves or our co-workers without any extra training.

Working as a cashier was the best job, you had fans blowing a bit of cool air on you, and you got to flirt with any cute guys that were ordering food. Working the grill was the worst. It was amazingly hot, greasy, and hectic. When we were short-handed, they’d have cashiers working the grill – our training consisted of the cooks telling us “poke the spatula into the middle of the burger to make sure it’s done, and don’t put the cheese on until the burger is done!” That was it.

Moving to Central Oregon in the 1990’s, I realized that most people on the other side of the mountains had no idea there was even a State Fair, let alone that it was worth seeing. Of course, the ranchers and 4-H kids were the exception to this rule, since they were heavily involved in showing at county then at state fair. When Mike and I got together, I asked if he wanted to go to the fair, at first he was resistant until one year when we attended the Deschutes County fair and Mike asked if the State Fair was any larger. Hah, the Deschutes Fair would fit into just one tiny corner of the massive State Fairgrounds. Once he found that out, he was willing to give it a try. The next year we went, and had an amazing time. Instead of trolling the midway for cute boys like I did when I was young, we played with cute animals and spent hours in the exhibits. We’ve been going every year since.

2 years ago we began to notice some changes, fewer good acts were playing during the day, less exhibitors in the competitions. Last year they moved the photography exhibit out of Cascade Hall to make room for a gambling hall and crammed nearly everything of interest into the Jackman Long building. Some good things were added too, like the Extreme Sports area with everything from BMX riding to a pretty decent Freestyle MX show last year. 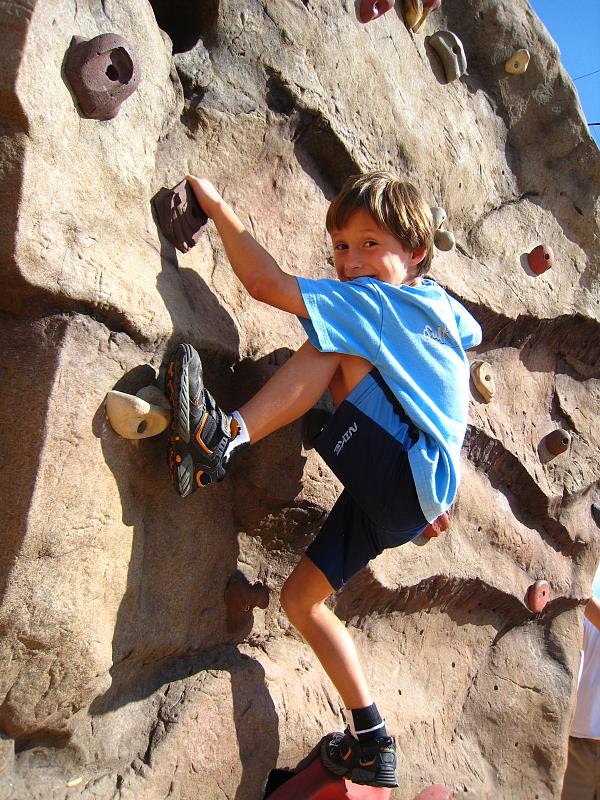 The rock climbing was a great (and free!) way for kids to blow off steam.

BMX rental prices were cheap, and kids and adults all had a great time out on the track.

The “Extreme” area included some less common booths like this pellet gun target shoot that allowed the kids to try out some of the higher end automatic rifles on the market, cost was not exorbitant.

A variety of competitions, some locally sponsored and some part of a national circuit, gave people a great opportunity to see sports they wouldn’t normally be interested in.

Although sometimes cheesy, previous year’s free entertainment included some really fun acts like this magician and also amazing talents like the Gentlemen Jugglers.

Having some of the vintage machines from the Brooks Steam Up at the fair was a great tie-in for both events.

The Pavilion shows have ranged from Walking with Dinosaurs to a display of Rock and Roll memorabilia to this Cirque-like show that was so good we saw it twice. This year the Pavilion was fenced off, and housed no activities at all.

This year the only good thing about all the changes was that we walked less. Why? Because about 1/5th of the space used in the past was fenced off and no longer in use. None of the attractions you see in the pictures above were at the fair this year. There are fewer exhibitors and vendors along with fewer places for Oregonians to show off the things they care most about like custom cars and funky art.

It’s sad when you see things go downhill so quickly. I don’t know what the answers are, but whatever they’re doing right now is not a step in the right direction.

That said, we did still find some fun things to do, some old favorites who continue to return, and a few new things that we enjoyed. Like, it’s impossible to not love wallabies. Especially wallabies with babies.

And although the selection of old cars was minuscule, what was there was fun and funky.

We enjoyed watching the chain saw carving artists too,

And some of the art on display was beautiful

We were also surprised when one of the highlights of our day was watching a master craftsman at work on the potter’s wheel.

I want this Fair to still be a part of my life when we’re old, I want to still be able to walk the barns and see the goats and the funny lamas and the huge draft horses. I hope the State is able to work things out and turn it around, because it’s not headed in a good direction right now. But still, how bad can it be when there’s lamas?

So, is it still worth the cost of admission? Yes, because admission this year was only $8. You can bring in your own food and drinks to make it even cheaper, so if you’re frugal there’s enough here to keep you happy. However, if you’ve got a large family and you plan on riding some rides, all-day ride bracelets are $50, the average meal will set you back $15, and in that case it’s tough to justify the fun/cost ratio. But still, llamas and wallabies. It’s not all bad.