I admit, I was a little concerned about taking Mike to Ashland, I mean, it’s a theatrical town and Mike is decidedly NOT theatrical. I figured it was useless to try and get him to see a play, so we’d just be exploring the area and of course checking out their Antique Stores. I’d have a good chance of Mike liking Ashland if they had a good selection of cool antique stores. Heck, if he found some cool vintage motorcycle toys for cheap, he’d practically be ready to move there!

We got into town very early, so spent a few hours just cruising around the neighborhoods above the city.

Plenty of neat old craftsman-style homes here have been updated and are now pretty darned fancy. I love that even though quite a bit of money has been thrown at these restorations, there’s still some artistic flair and whimsy showing that you wouldn’t find elsewhere.

Driving through a neighborhood, I saw one of those cheesy cement deer statues in someone’s front yard and thought it really clashed with the other landscaping – until it moved.

Nice rack on that fellow, and he’s definitely not missing any meals.

Next we drove through a development area that had roads and sidewalks constructed, but not much else. We were enjoying the view of the opposite hillside when I noticed a cat walking down the road in front of us. He turned around and gave us a look, and I realized “that is not a cat”. Actually, it was, just not a domesticated version. 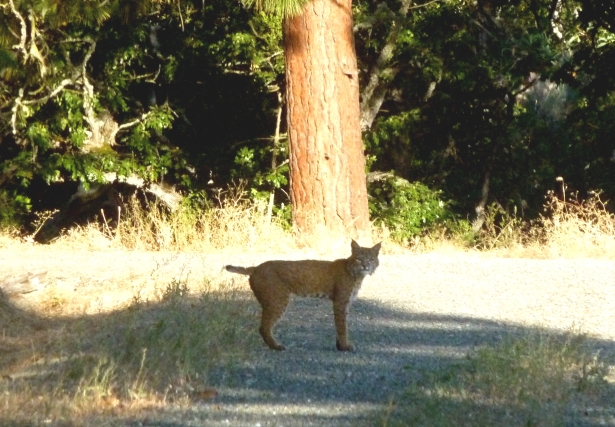 Not often that you catch a bobcat in a residential area – and this guy was huge. He was completely unconcerned about the car, just kept slowly walking up the road and occasionally turning around to size us up. He finally walked into the treeline and was gone. I love unexpected sightings like this. It reminds me of how nature is just living its life right next to us, and I’m usually just too preoccupied or ignorant to notice.

After exhausting most of the back roads, we traveled in to town where I had Mike sample the Lithia water. He was not impressed. Fortunately, he WAS impressed with the town. 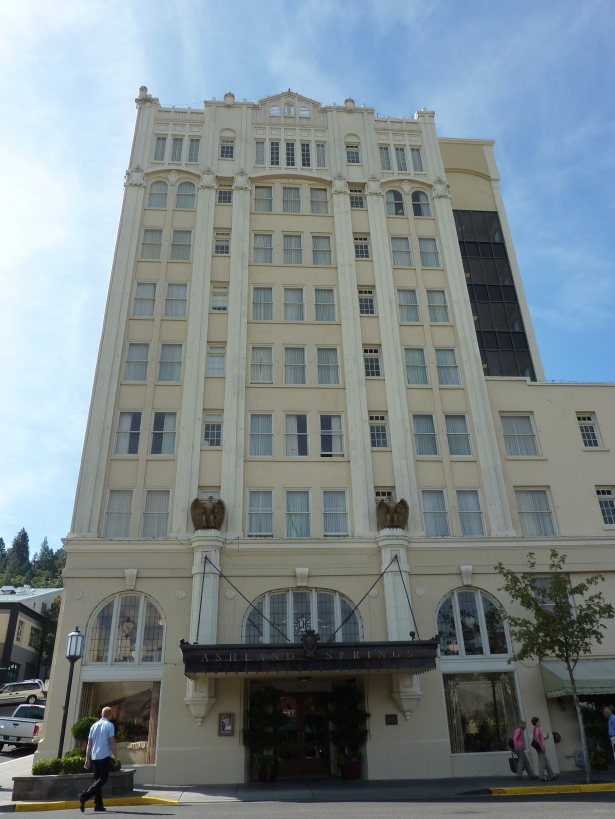 Ashland Springs Hotel - built in 1925, and originally named the Lithia Springs, I remember it as the Tudor-Styled Mark Anthony. 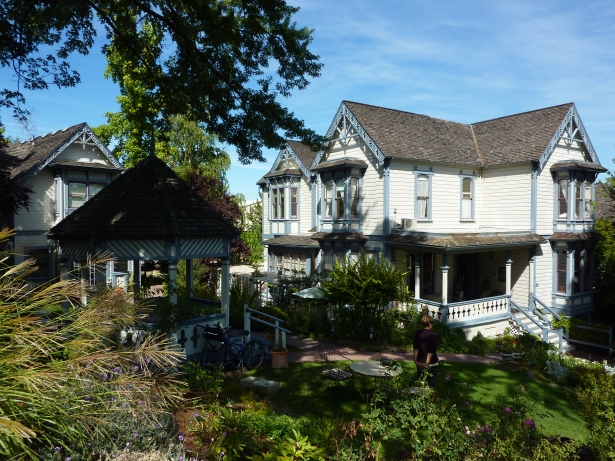 One of the B&B's downtown

Mike wasn't impressed until he saw all the plaques and realized they'd been putting on plays here since 1935. 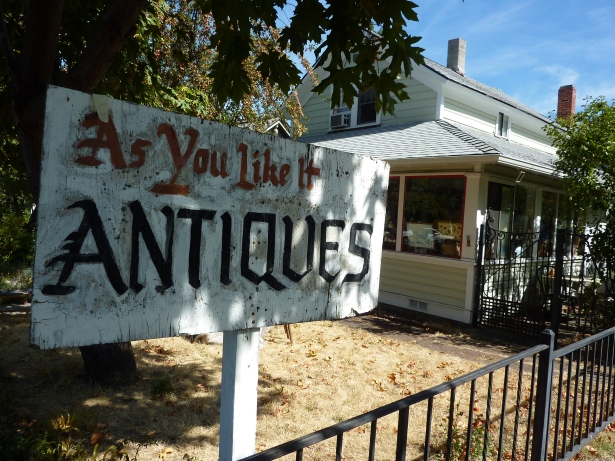 As You Like It Antiques apparently means "as the owner likes it", since they never did open. 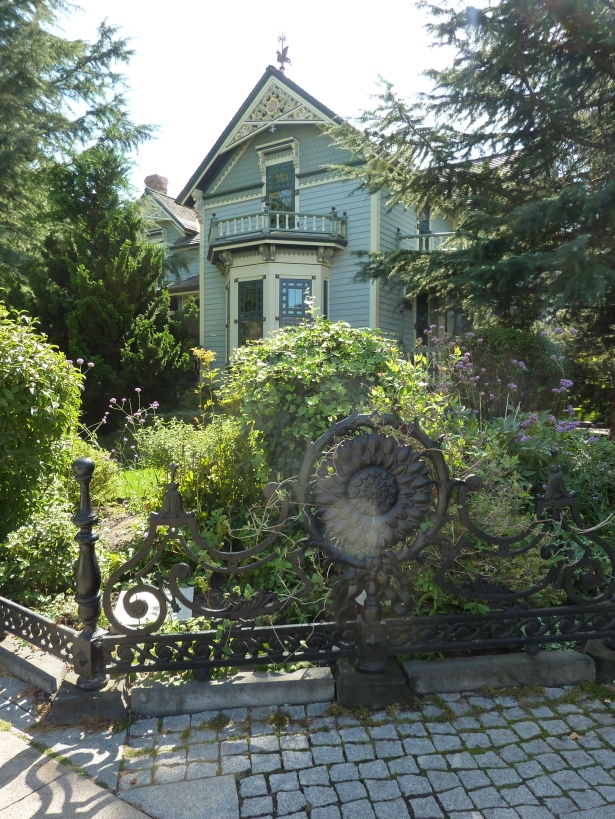 Amazing, gorgeous, and a little strange - only in Ashland would you see a multi-million-dollar home restoration with a theme of dragons and sunflowers.

Dilapidated down by the railroad tracks. At what point do you decide the shrubs win, and just stick a fence across the front stairs?

Hey look, they do have homes under $100k in Ashland! 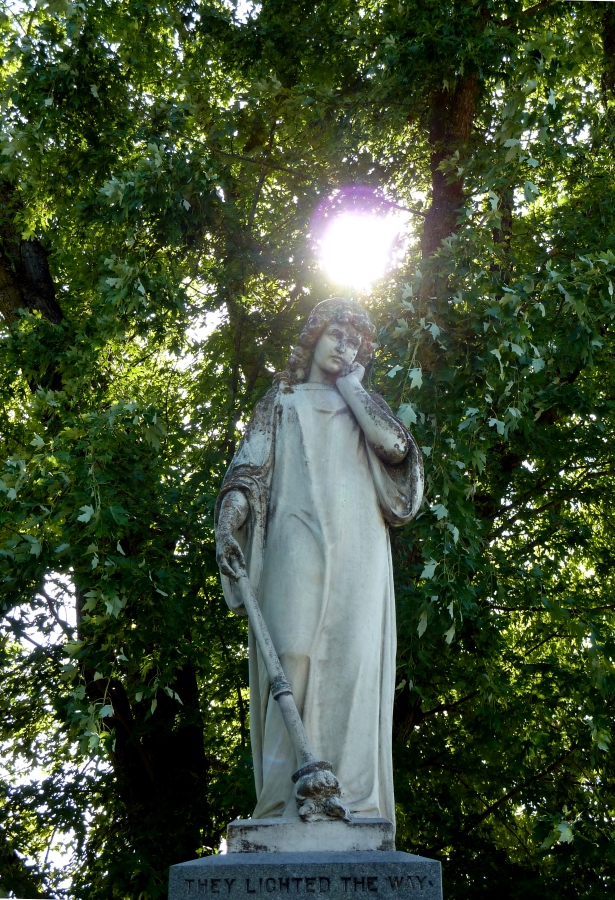 As the sun sets on Ashland, we bid farewell to Chautauqua-inspired artistry, and head down the road to K-Falls

We had a great time exploring Ashland, Mike really loved it here. Hey, maybe next time I can actually get him to see a play!